Lough Belshra is a small lake in the Slieve Aughty Mountains that lies in a valley between two hills with Sonnagh Windfarm on one side. The lake is split between 3 townlands, Sonnagh Old, Kilnagappagh, and Gortnamannagh West. 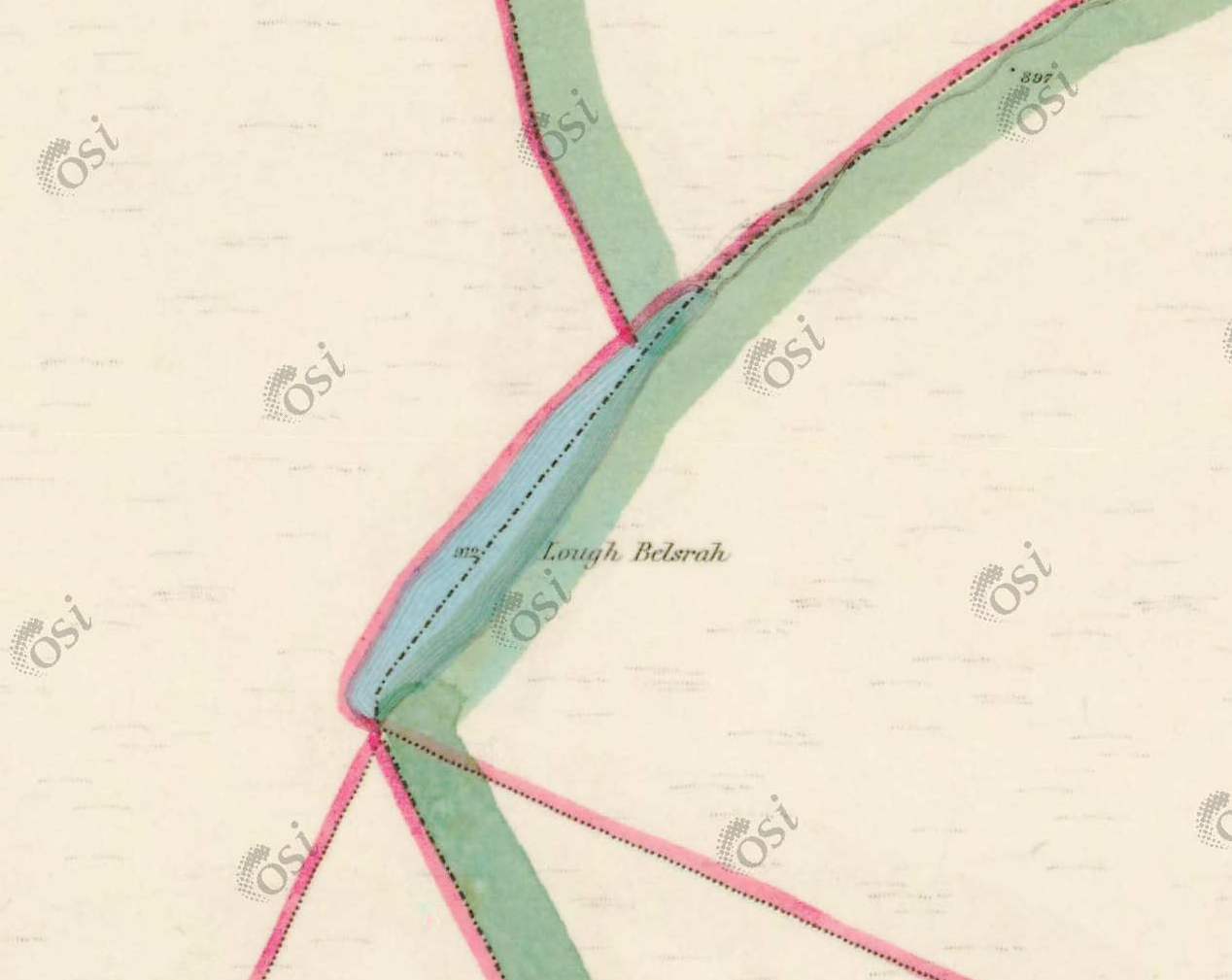 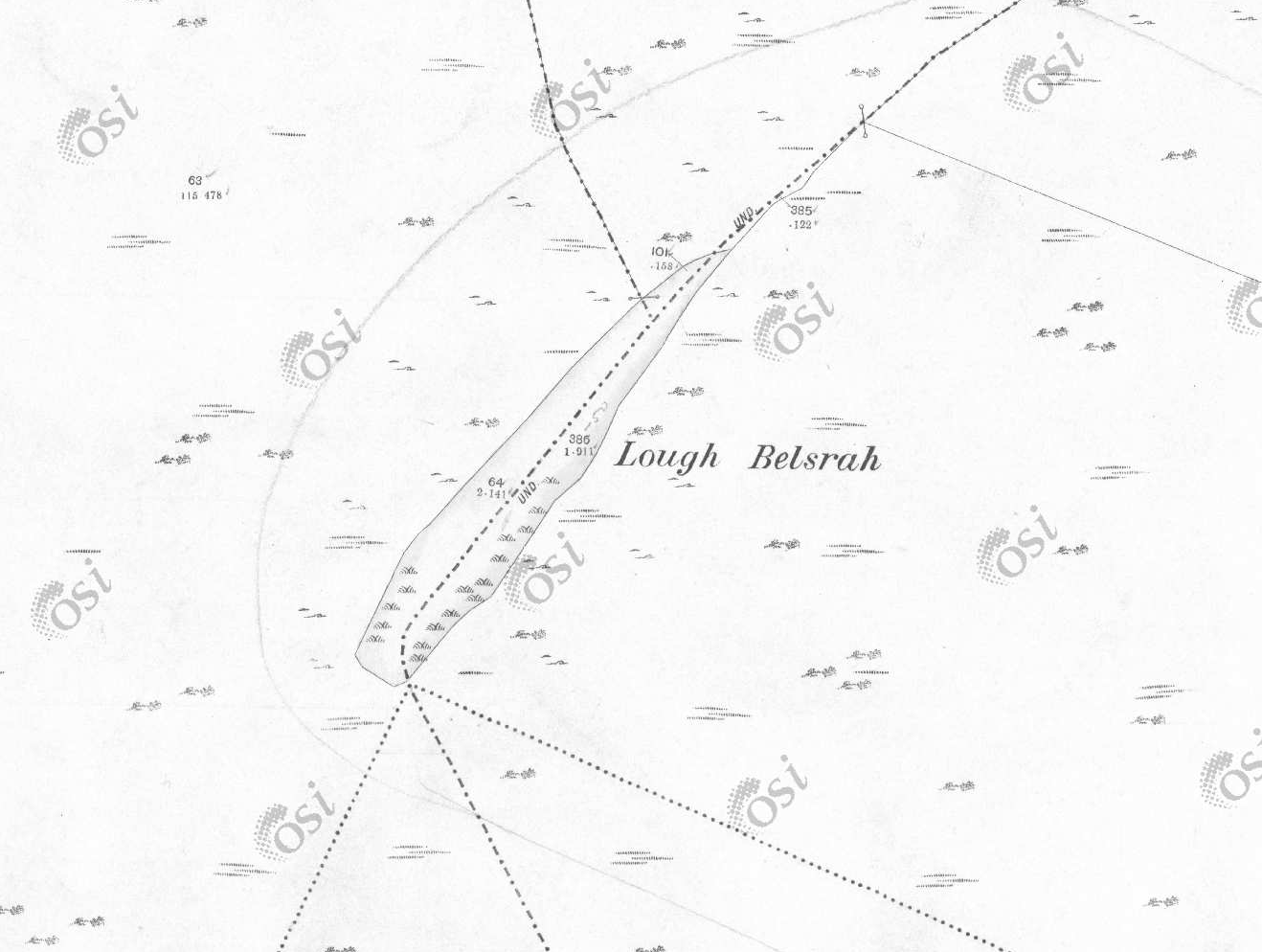 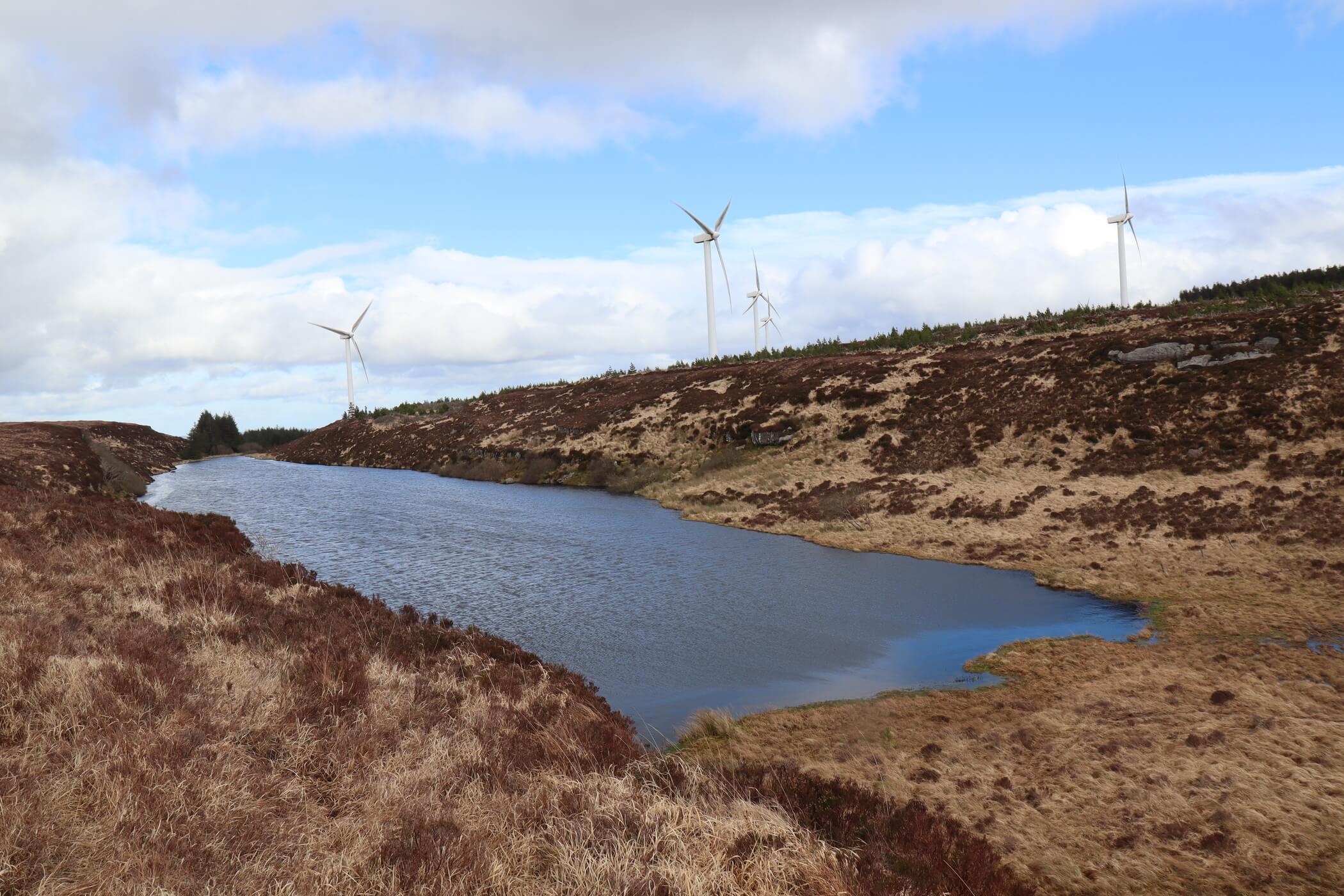 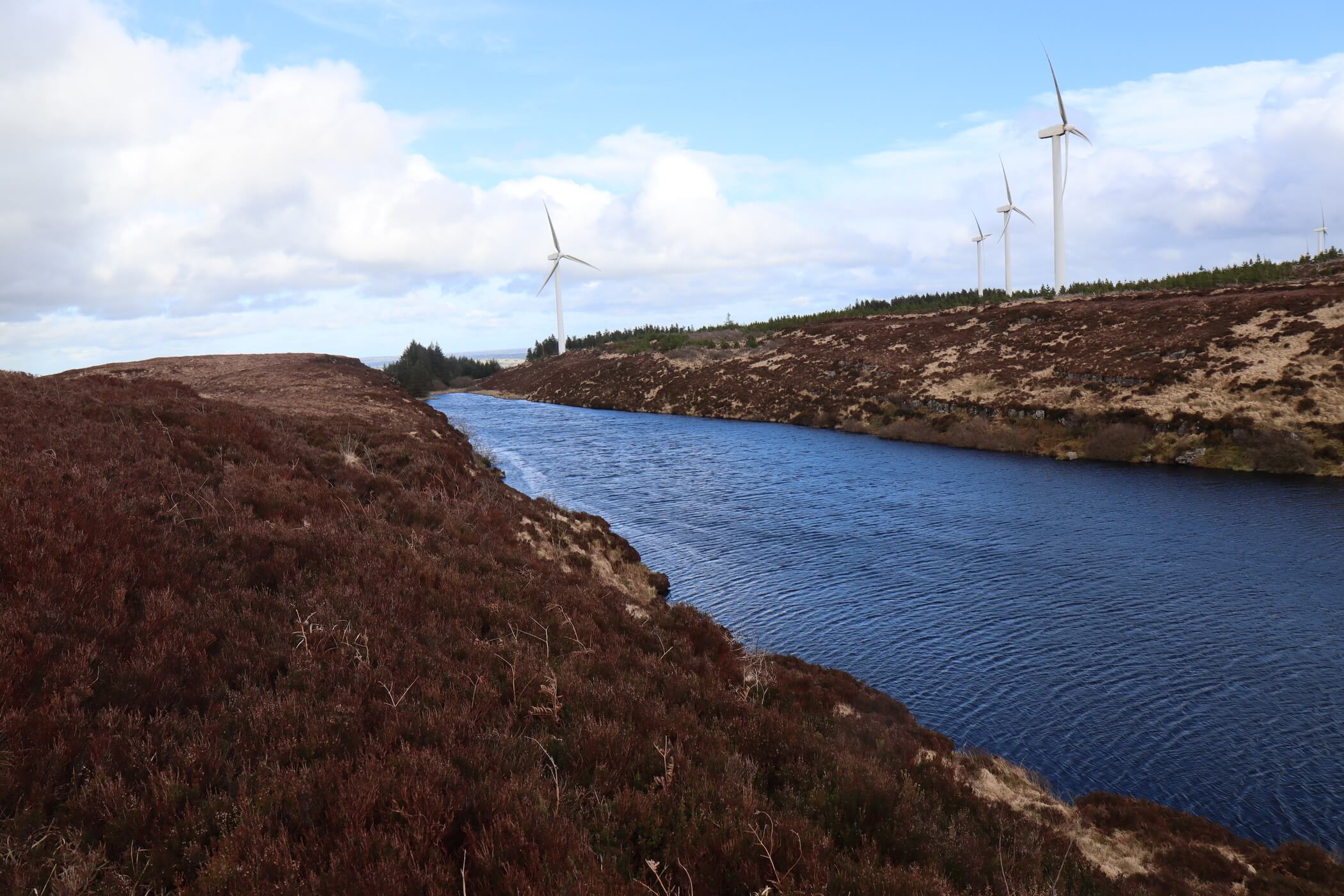 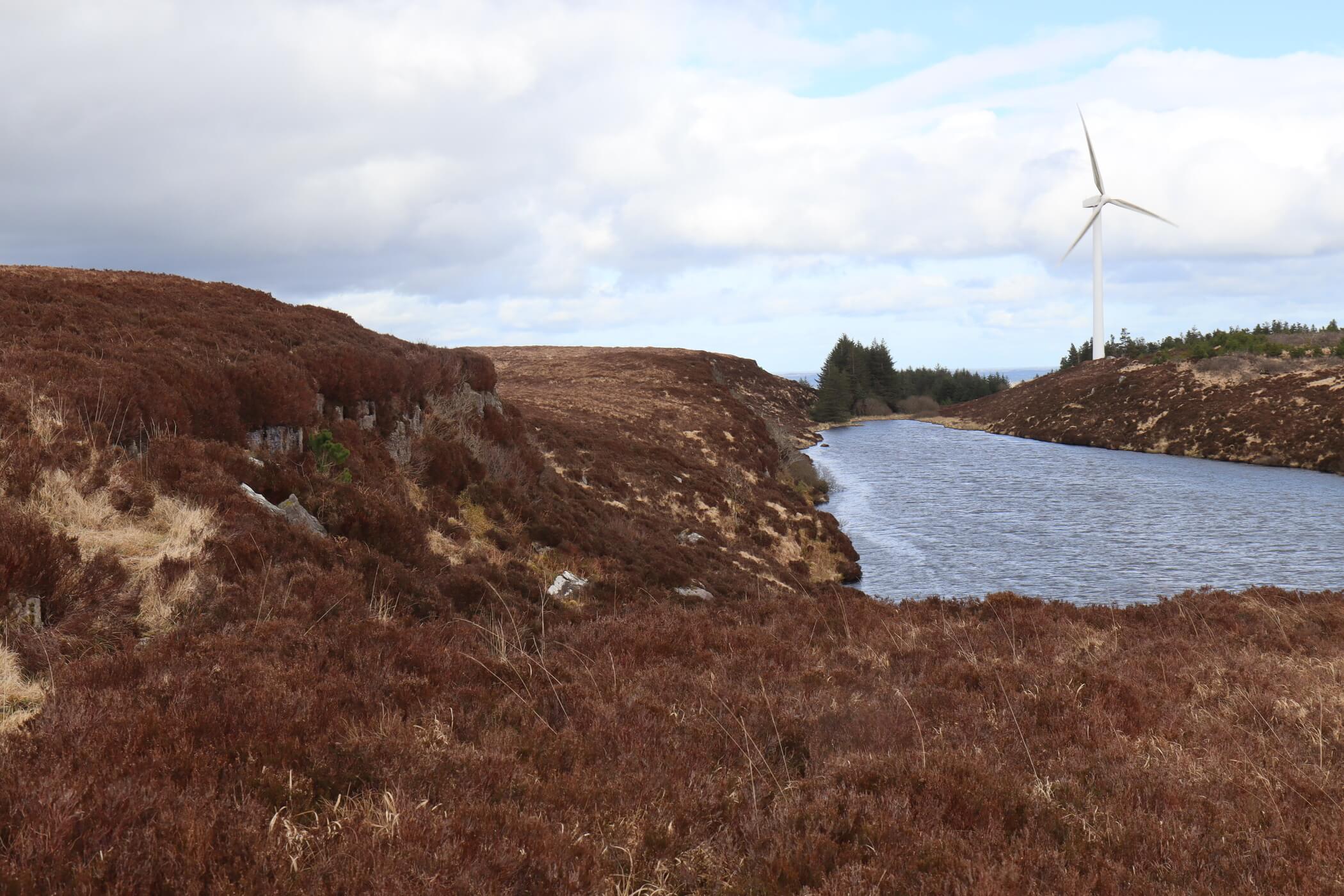 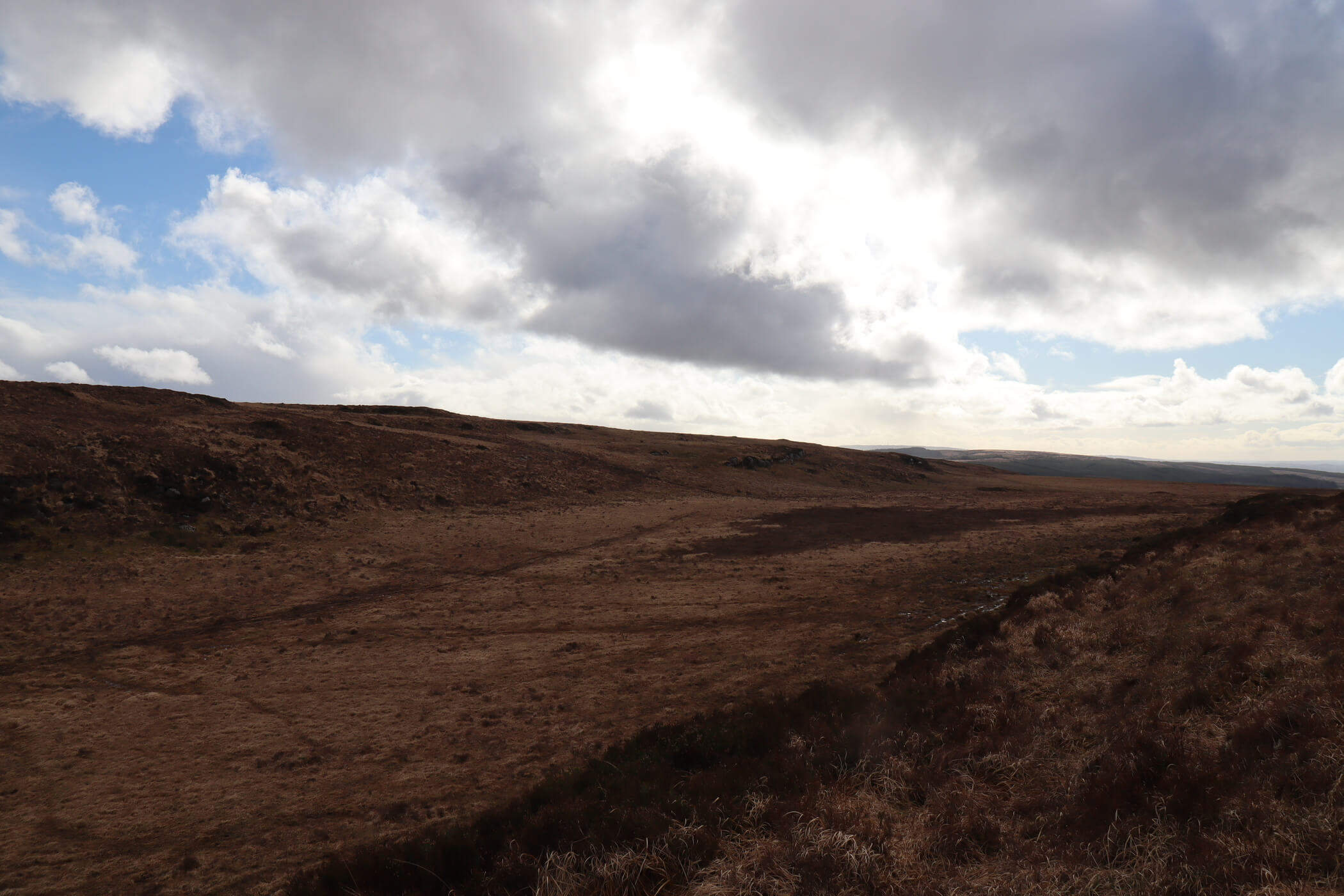 There are several similar valleys between the lake and Cloughan Trig Pillar, the ground is very spongy in these spots! 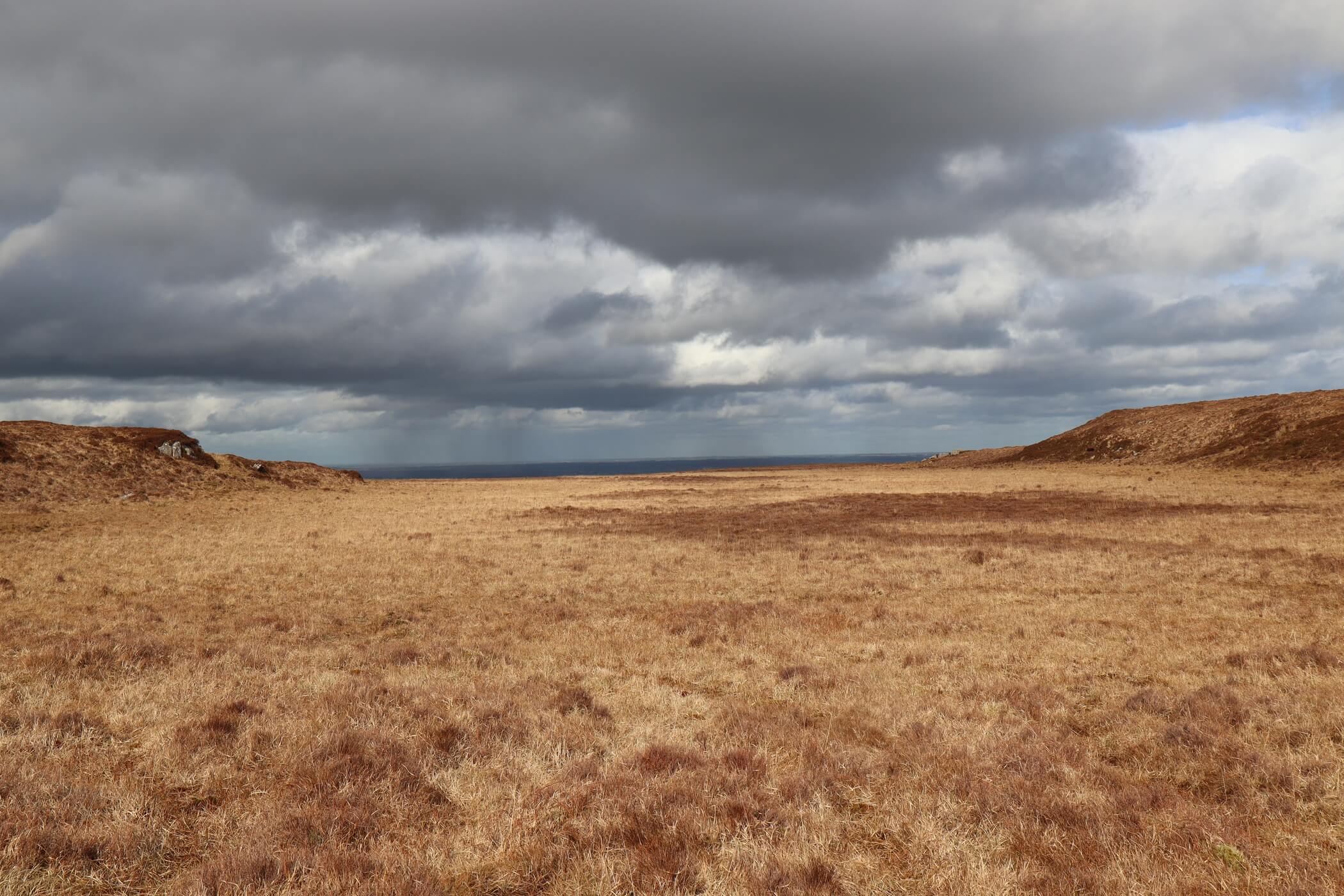 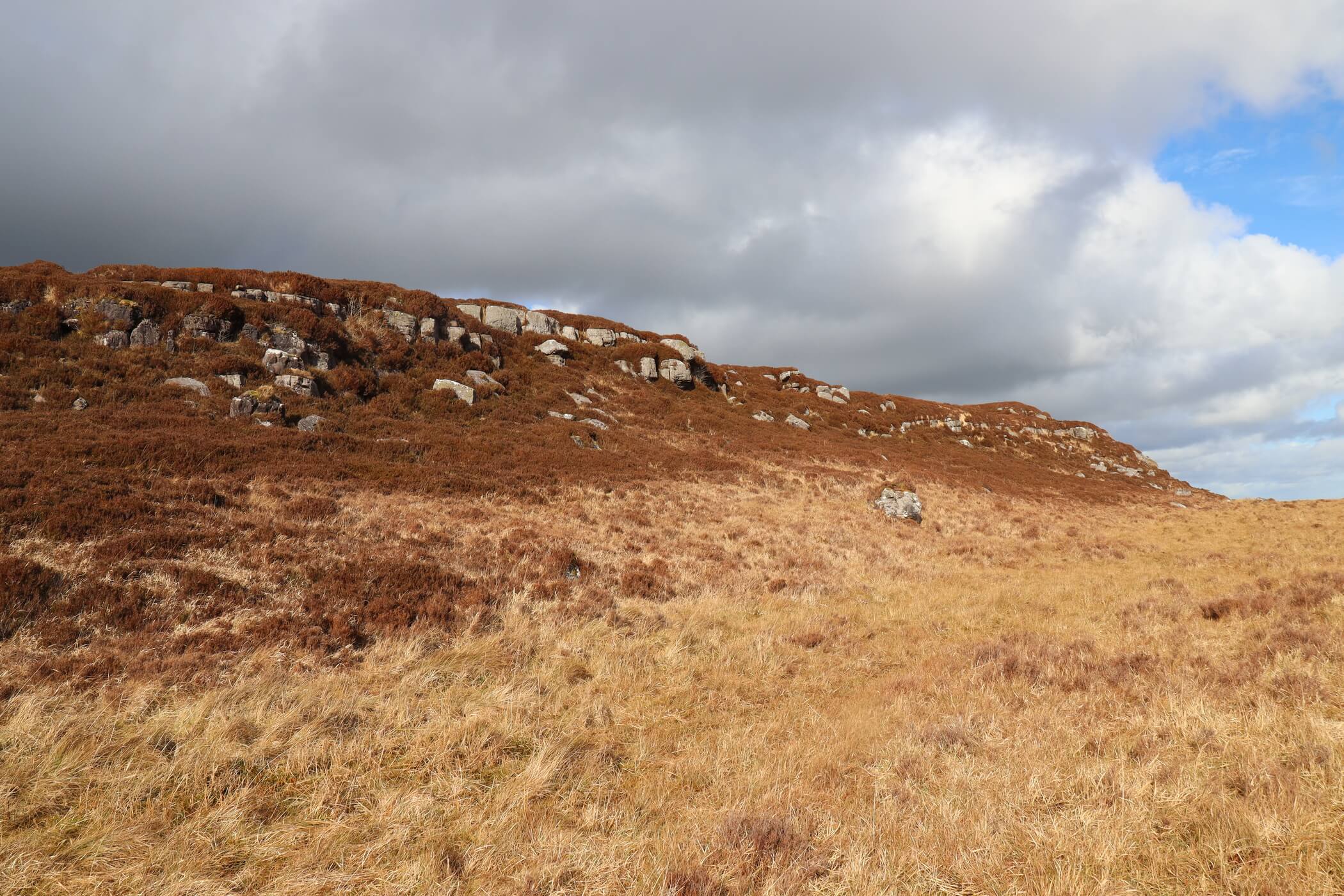 The lake is mentioned in several stories in the School’s Collection from schools around the area. They vary in the details but they are broadly similar. Several agree that there was once plenty of fish in the lake but Priest put a curse on it and since then there have been none, they differ though in the reason he cursed it. Two say that the lake was once in a different place, one of them actually tells us where, near Finnegan’s House. Most agree that the lake is a spooky place frequented by fairies and other strange creatures and not to be visited at night! I’ve included 3 stories from 3 different schools (Killeenadeema, Sonnagh, and Castledaly) below with translations for the ones in Irish. 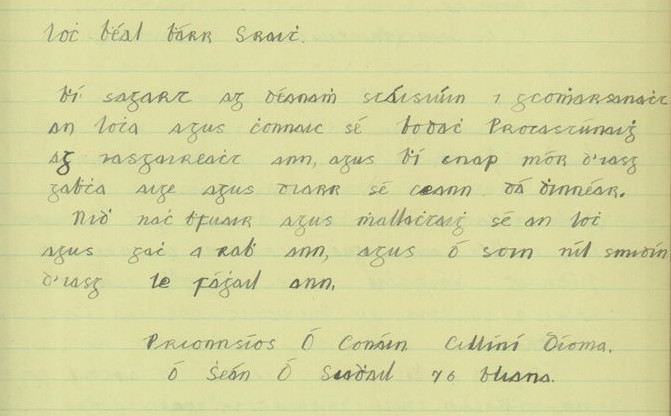 A priest was doing a station near the lake and he saw a Protestant lout fishing there, he had a big heap of fish caught and he [the priest] asked for one for his dinner. He didn’t get one so he put a curse on the lake and everything in it, and since then there’s no fish to be got there. 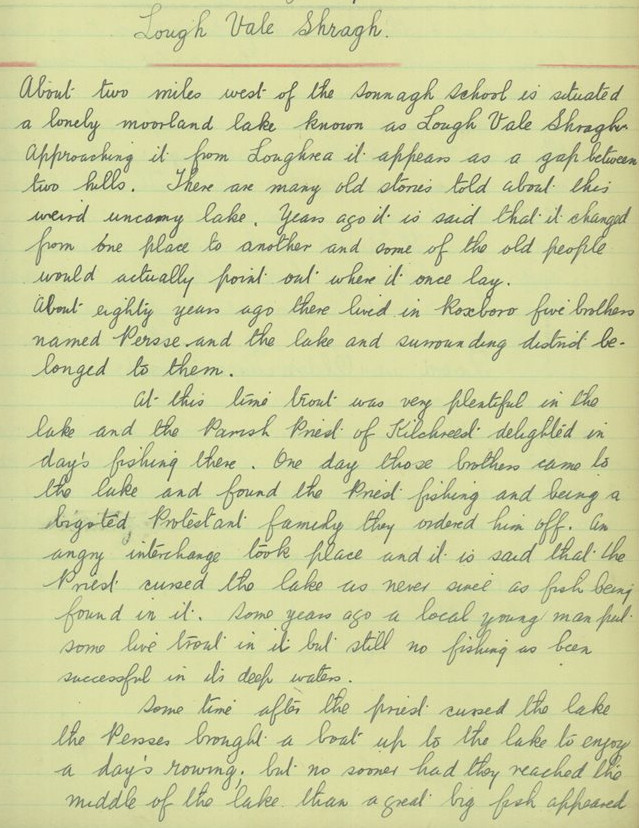 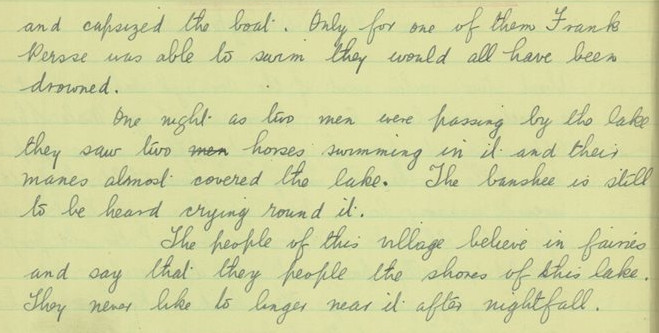 About two miles west of the Sonnagh School is situated a lonely moorland lake known as Lough Vale Shragh. Approaching it from Loughrea it appears as a gap between two hills. There are many old stories told about this weird uncanny lake. Years ago it is said that it changed from one place to another and some of the old people would actually point out where it once lay. About eighty years ago there lived in Roxboro five brothers named Persse and the lake and surrounding district belonged to them. At this time trout was very plentiful in the lake and the Parish Priest of KIlchreest delighted in a day’s fishing there. One day these brothers came to the lake and found the priest fishing and being a bigoted, Protestant family they ordered him off. An angry interchange took place and it is said that the priest cursed the lake as never since is fish being found in it. Some years ago a local young man put live trout in it but still no fishing has been successful in its deep waters. Some time after the priest cursed the lake the Persses brought a boat up to the lake to enjoy a day’s rowing; but no sooner had they reached the middle of the lake than a great big fish appeared and capsized the boat. Only for one of them Frank Persse was able to swim they would all have been drowned. One night as two men were passing by the lake they saw two horses swimming in it and their manes almost covered the lake. The banshee is still to be heard crying round it. The people of this village believe in fairies and say that they people the shore of this lake. They never like to linger near it after nightfall. 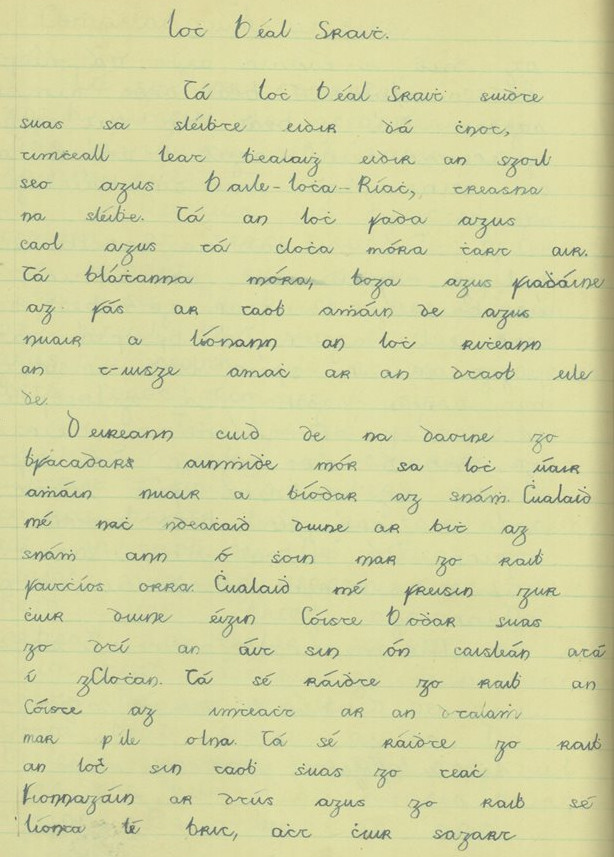 Lough Belshra is situated up on the mountains between two hills, you go around the road between this school and Loughrea, across the mountain. The lake is long and narrow and there are big rocks around it. There are big flowers, soft? and wild growing on one side and when the lake fills the water runs out on the other side of it. Some people say that they saw large animals in the lake one time when they were swimming. I heard that no one swims there at all since then because they’re afraid of it. I heard too that someone put the Cóiste Bodhar up to that place from the castle in Cloughan. It is said that the Cóiste was going on the ground like a [píle olna]. It is said that that lake was up beside Finnegan’s house at the start and that it was full of trout, but a priest put a curse on it and the lake went down to the place it is now. Since then there’s no trout in the lake at all, but there are lots of eels, and big ones too. My family told me this.

According to the story above from Castledaly School, the lake was once located near Finnegan’s house. According to the census (1901 and 1911) there were Finnegan’s living in Gortnagleav, the only house in the townland. It is likely that this is the same house as mentioned in the story. 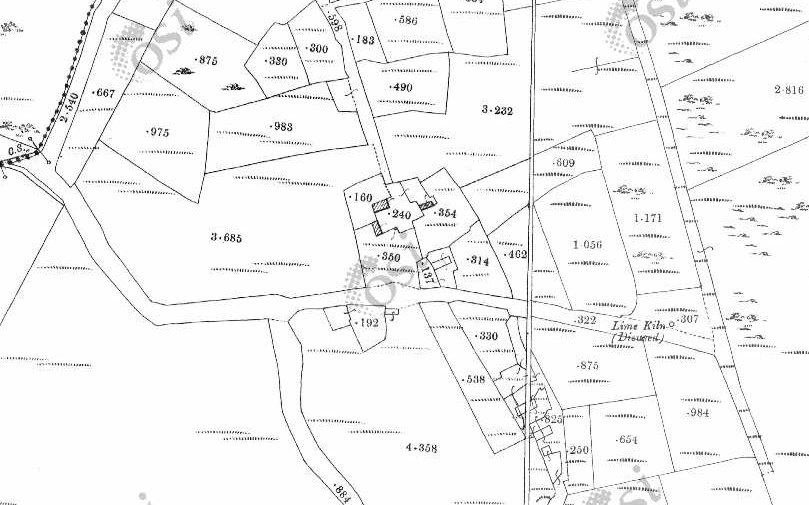 The lake is about 2.3km from this house. 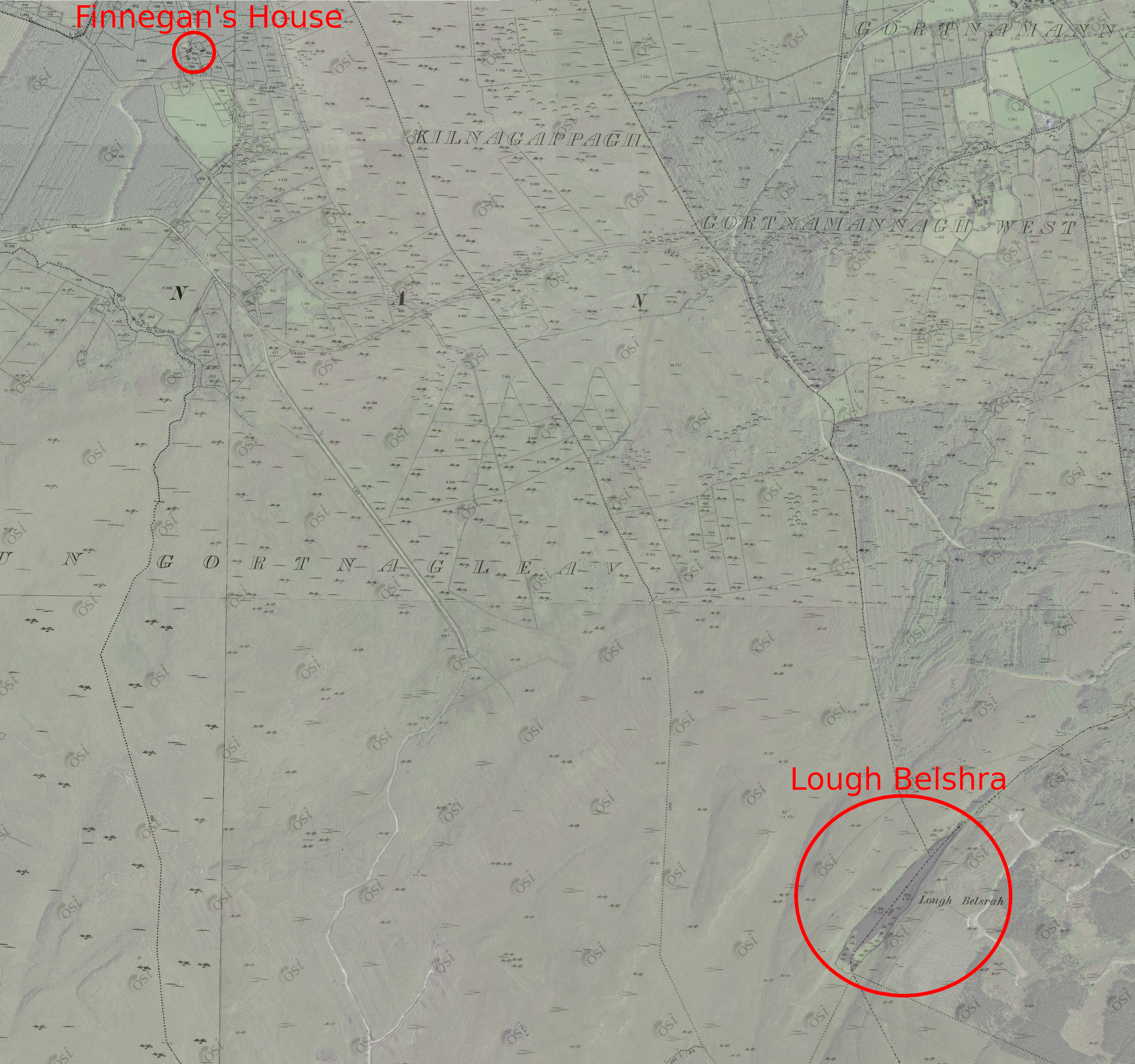